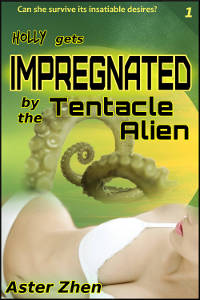 Holly gets Impregnated by the Tentacle Alien is available now from the following retailers:

They broke up months ago, so when Sian sends her a gigantic present, Holly is suspicious. Will the creature inside bring them together, or is this Sian’s idea of revenge? How can Holly avoid her twisted plans? A 3600 word short story of tentacle monster impregnation and passionate revenge!

This story is part I of the Breeding Holly trilogy, though it can be read as a stand-alone.

If you love interspecies breeding, you’ll love Holly gets Impregnated by the Tentacle Alien: Breeding Holly 1!

The creature slid across the floor. It was sinuous, almost elegant in its movements, each tentacle pulling together in silent coordination.

Holly pressed herself against the window, as if to force herself through the tiny frame. “The cops will be here soon,” she repeated, her voice emerging as a squeak.

It was inexorable as the tides. The creature slid closer, each movement deliberate, as though it was controlling itself, playing out the time between each stride to manipulate her reaction.

Holly stared, transfixed. The swaying of its limbs had a hypnotic quality, the creature’s skin shimmering blue to green as it neared her.

One of the tentacles reached out, and Holly shuddered as it touched her hand. She twitched her arm to the side and made a run for it. The creature let her get halfway across the room, before it reached out its arms and caught her, almost lazily, as though the motion were an afterthought.

It wrapped its tentacles around her waist, ignoring her struggling legs and pummelling fists, and tossed her onto the bed. Holly bounced on the mattress, rising up on her elbows as she scrambled to put her back against a wall.

It was the dry season, and she’d only worn briefs and a camisole to bed. The creature slid a tentacle between her legs, pressing into the fabric of her panties. Holly gasped, swatting it with her hand. It rubbed her thigh, humming as though pleased.

Holly withered under its gaze as it cast its full attention over her body, as though seeking to study the secret of her anatomy.

“I have some credits in the house. You can take them if you leave.”

The creature slowly moved its gaze from her legs to her face, then deliberately snapped one of the straps on her camisole.

Using two of its arms, it tore the garment down one seam, ripping the fabric from her body. It rolled the remnants into a ball, and shoved it into Holly’s mouth.

Now that they were exposed, the creature slid its suckers along the soft undersides of her breasts. Holly whimpered as her nipples stiffened. The creature began to play with her breasts, squeezing and pinching until Holly squealed. She squirmed, trying to escape its touch, but the alien held her firmly in place. It rubbed its suckers against her, exuding a thin film of liquid on her cheek.

Holly flinched, tossing her head from side to side in an attempt to get the creature to move away. It cast its full attention on her face.

It spoke from its stomach, the consonants creaking out as if filtered through a smoker’s lungs.

She began to scream again, the noises muffled by the fabric stuffed in her mouth.

“Holly!” the creature said, its first word punctuated by a triumphant growl. It caressed her face and neck, its suckers leaving faint red marks on her skin.

Holly struggled, biting down hard on her camisole as she kicked and squealed. Tears of fear and humiliation trickled from her eyes as the creature wrapped its arms around her, tighter, growling to her with deep purrs. It practically smothered her with its weight, its limbs undulating over her body, pressing her deep into the mattress.

Available at the following retailers.